The last leg, or, a memorandum from the writer of this blog concerning the regrettable need to earn his living and the pleasures this occupation nevertheless brings him, written in stylistic homage to the aforementioned

Welcome back, dear reader. It is a while since I have your whimsy regaled with tales of my life and opinions, and I fear that you might think my invention had failed. Not so! But my time has necessarily been taken with the regrettable need to bring home some bacon.

For those of you who do not know, when I am not failing as a linguist, I earn my meagre way in the world making books: typesetting, digitizing, and covertly editing. I have crafted (or, more accurately, hacked out) something of a niche in facing-page translations, no doubt partly informed by my probably misplaced eagerness to pick up and play with any given language, and after a lengthy and ultimately thankless period working for the Clay Sanskrit Library I am now largely working with a similar project: the New York University Press’s Library of Arabic Literature.

The range of works covered so far is impressive and wise in its selection. There is, of course, the Islamicism: the Epistle on Legal Theory of Muhammad ibn Idris al-Shafi’i, a hagiography of Aḥmad ibn Ḥanbal (what a virtuous man he was), and an early biography of Muḥammad. But there have been less conformist and secular works too: a volume on the Principles of Sufism (by a woman, no less) and what I can only describe as a pedantically overlong exercise in intellectual one-upmanship and sarcasm which overly-hindsighted academics suggest has claims to being an antecedent of Dante in its description of a journey through heaven and hell (though, I have to say, I think the Apocalypse of Peter rather trumps it on that front).

But it is a four-volume translation of a nineteenth century novel by the Lebanese synonym-obsessee Fāris al-Shidyāq entitled Leg over Leg that has mainly been occupying my time, and I have to say: delightfully so. If you can imagine a semi-autobiographical Tristram Shandy written by, excuse me, an intellectual and an innovator, a smartypants and a smut-peddler, an obscene lexicographer and a lecherous obsessive, a lover of lists and a lyricist of love, then you will be somewhere near conceptualizing it, as well as understanding why I enjoy it so.

The translation by Humphrey Davies is, as the Fāriyāq himself would doubtless put it,

of our project so far. It swoops effortlessly between high-falutin’ rhetoric and crass vernacular in a way reminiscent of Flann O’Brien (and therefore rather close to my heart, as those of you who have noticed that I can barely write a single post without inserting both a grossly obscure reference and an obscenely gross adverb somewhere in it will realize), and faithfully rendering the alliterative synonymy, the occasional bursts of rhymed prose, the poetry itself, and the general joyfully irreverent tone of the work.

Lest you fear that this has become a paean to the greatness of others, let me wrench you back to my own good self, because the pleasure of working on this has been—in addition to the content—the typographic challenge. Unlike our other texts so far, this work originated as a printed volume, not a manuscript, and the author was truly Shandyesque in his exploitation of the possibilities of print, with pointing hands, tailing-off chapters, marginalia, parallel text, chapters with no content, and general typographical playfulness. To retain the layout and other innovations of the 1855 original, whilst replacing its then-necessary but ugly and un-Arabic typeface (which the author himself, as Humphrey notes, described as being “of alien form”) with the elegant Arabic font of the LAL series has made the project an enjoyable challenge—even if it has taken up more of my time than I would favour.

So here, for your viewing pleasure, are some samples of What I Do For a Living. That living has, it is true, been rather overshadowing my life of late: such is the nature of my trade and its deadlines. The last leg of Leg over Leg is now underway: the proofs of Volume Four are complete and we have corrections and indexing to go and then, finally,

God (or the Adversary) willing, I will be clear of work-related tension,

which will leave me free to write more blogposts:

a prospect that should fill you with joy,

or, to be more realistic, 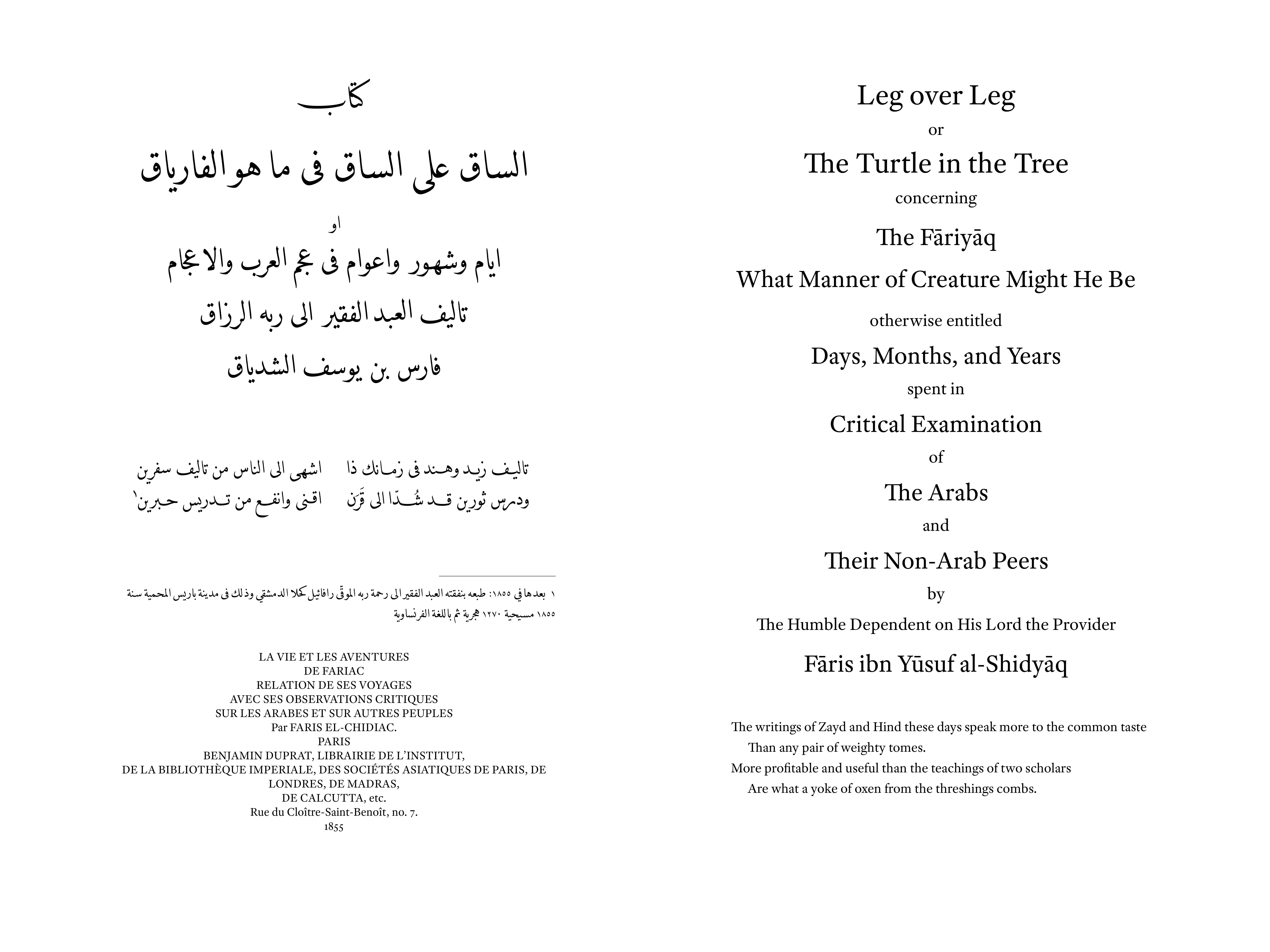 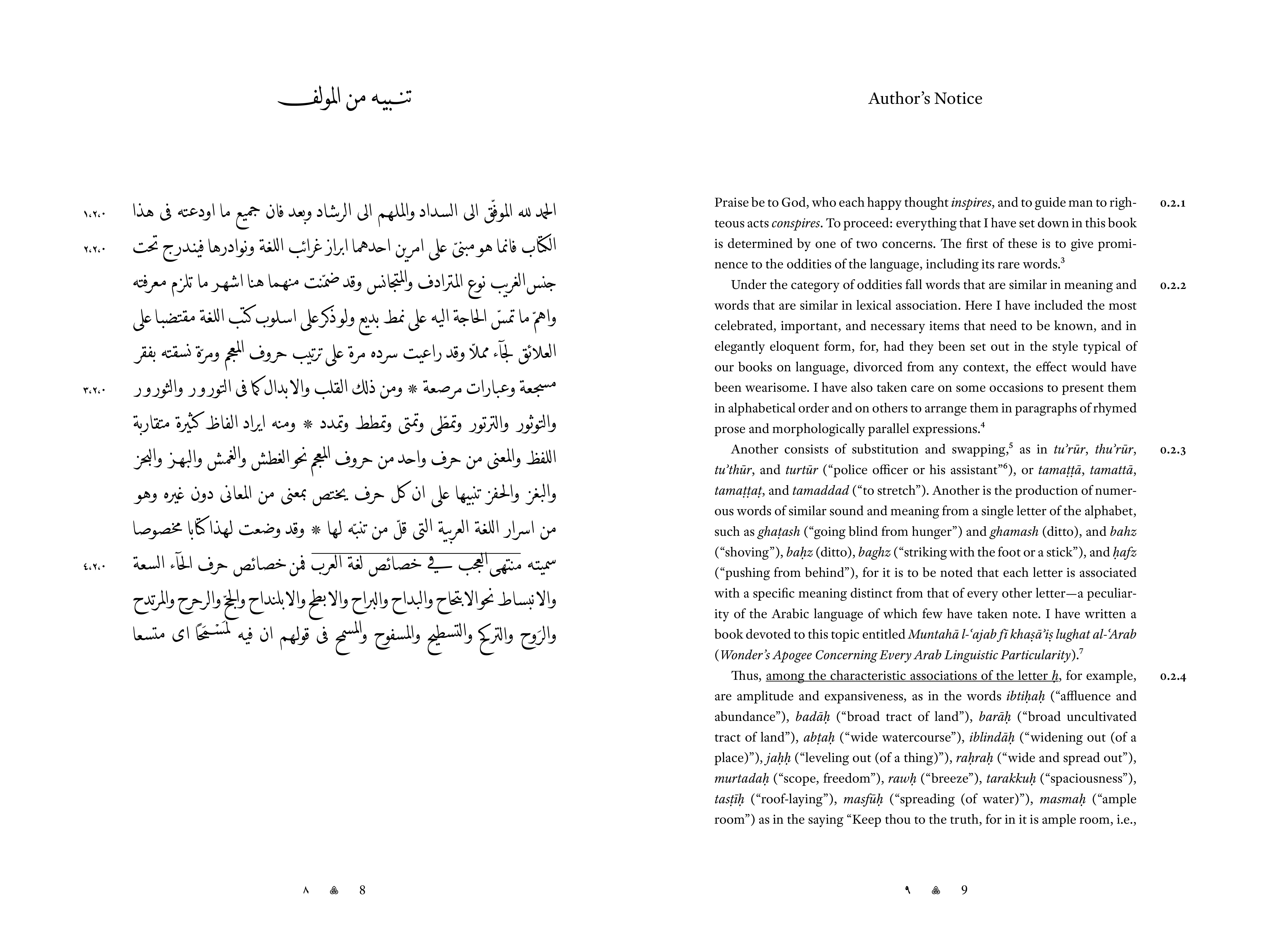 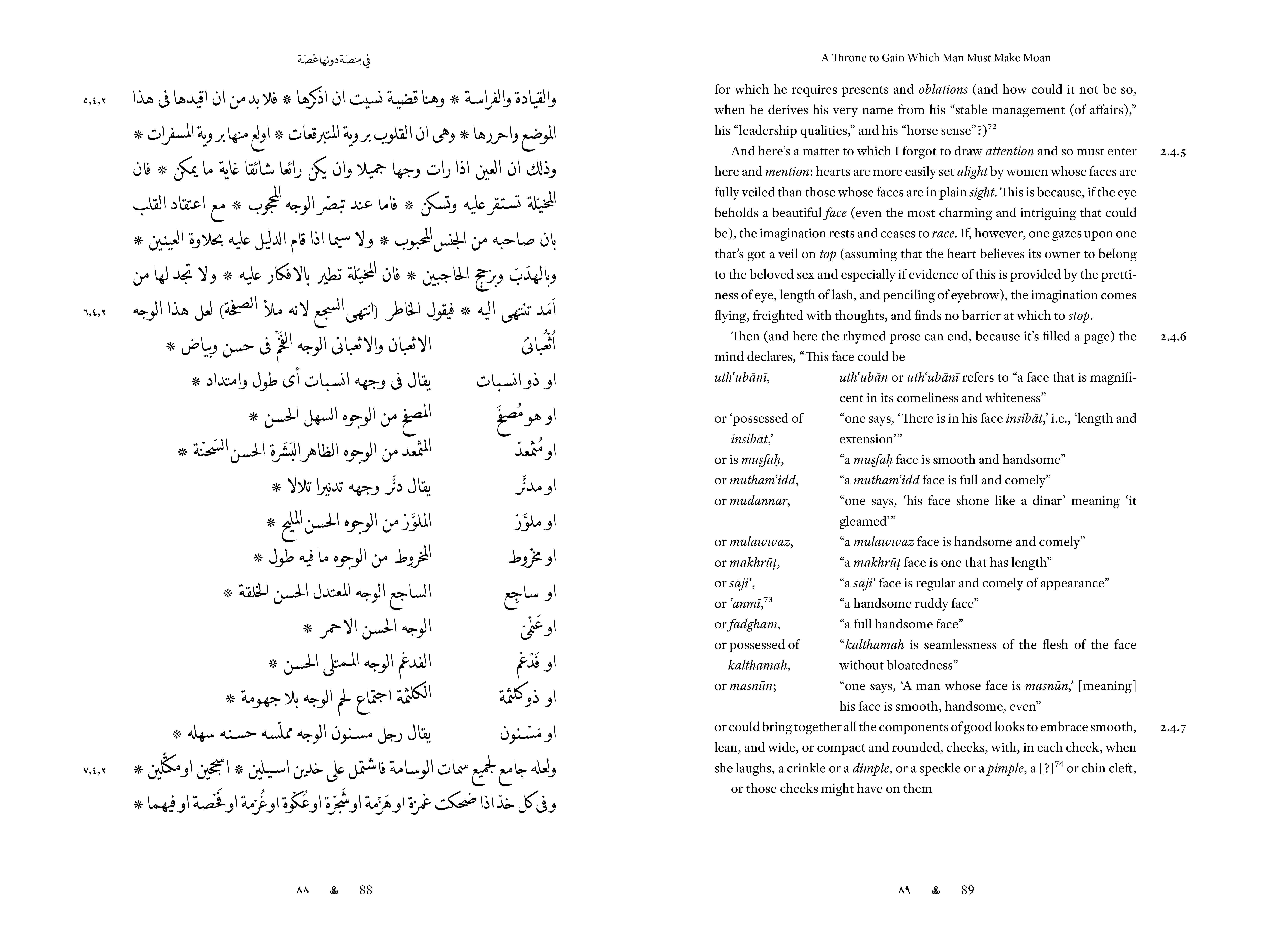 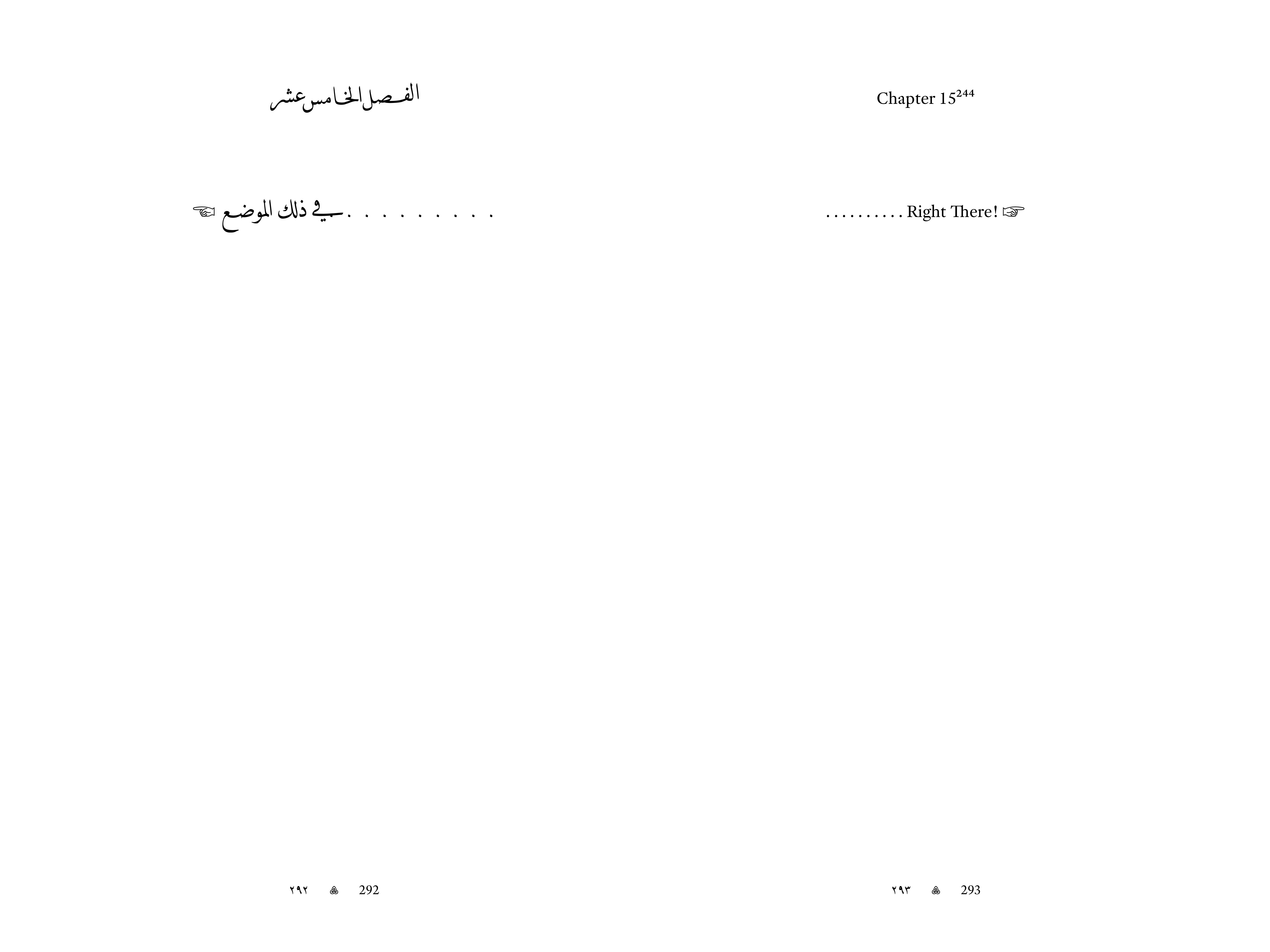 The entirety of Chapter 15 in Volume 2 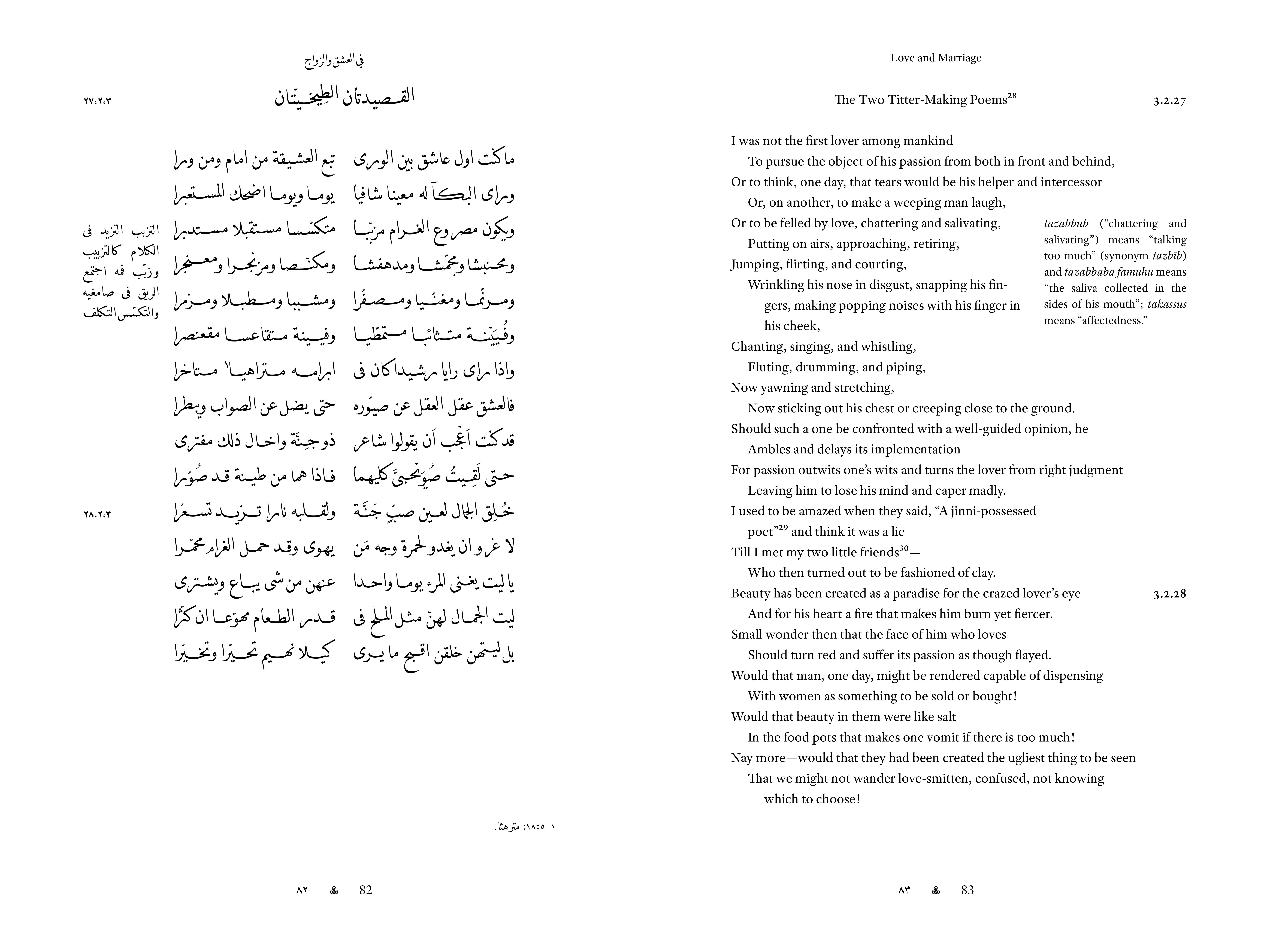 Keep me in a job, and buy it here! With any luck NYUP will do the smart thing and release the translation as a standalone paperback. You can read an extended extract here.