In which Theresa May lies to the folk of Stoke

Here is a letter, signed by the Prime Minister, to constitutents of Stoke-on-Trent Central—the massively pro-Brexit constituency shortly to have a by-election: 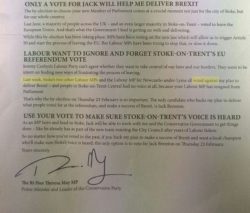 Last week, Stoke’s two other Labour MPs and the Labour MP for Newcastle-under-Lyme all voted against my plan to deliver Brexit …

And here, from PublicWhip, are the votes:

So, one out of three.

I suppose the question that remains is whether, when this direct lie has been exposed, the defence will be of the Paul Nuttalls “my girlfriend/press officer/aide done it” variety, or of the Kellyanne Conway “alternative facts” variety.

Either way, she has clearly learned a lesson from her new friend across the water: lie, lie, and lie again. By the time the reckoning comes, the seed you have planted will have already taken root.

Melania Trump is not the problem

Lots of indignation on Twitter and other parts of my social media echo-chamber about the £14 million it will cost to secure Trump Tower because Melania Trump will not be residing at the White House. In case you’re a little behind on this: Melania Trump is not the problem.

The problem is that the USA has a so-called President who is a narcissist fantasist, a self-confessed abuser, a misogynist, a racist, and a fascist, who has signed memos he has not read, who brain-farts threats and bullying on Twitter with no thought for the consequences, who has—through his utter unsuitability for and uninterest in doing the job he was elected to—handed power to the white supremacist Steve Bannon.  The problem is a National Security Advisor who wishes to “excise” Islam. The problem is an Education Secretary who has no experience or knowledge of education. The problem is Jeff Sessions. And the problem is that even if, as seems quite possible, a Trump meltdown leads to him vacating the Oval Office, he will be replaced by a religious fundamentalist.

Leave Melania Trump out of it, unless she actually does something genuinely worth commenting on. Indignation directed at her is, quite simply, judgemental misogyny. There are so many necessary and progressive targets of your rage. Don’t waste it and undermine your supposed progressiveness by indulging in this spite.

Article 2 of the Convention on the Prevention and Punishment of the Crime of Genocide defines genocide as follows (my emphasis):

Now, let me treat you to a quotation from a speech by Michael Flynn, so-called President Trump’s National Security Advisor:

Islamism […] is a vicious cancer inside the body of 1.7 billion people on this planet and it has to be excised. […] We should not fear this idea. We should define it clearly, and we should go after it.

He may have used the word “Islamism,” with its connotations of radicalism, but he references the 1.7 billion adherents of Islam. In other speeches, he has denied that Islam is a religion, stating:

It is a political ideology [that] hides behind this notion of it being a religion.

To be a Muslim—of any stripe—is, according to Flynn, first and foremost to adhere to a political ideology, Islamism, and he wants that ideology “excised.” This would seem to be, prima facie, pretty much advocating the destruction of Islam itself; because to Flynn Islam is the ideology: the religion aspects are is a “notion” it “hides behind.”

He doesn’t explicitly suggest violence, birth restrictions, or forcible transfer of children such as are necessary in the definition of genocide itself, but he certainly uses violent terminology: “excising,” a word about cutting, slicing, expunging, and “go[ing] after it”. If this is not a direct and public incitement to commit genocide, it’s a pretty much as close as you get.

I have only just come across this. It is horrifying, though it may not be news to you. A disturbing little adjunct that I found as I research it is that every single video you can find on YouTube with Michael Flynn talking about Islam seems to be “restricted”: only viewable if you have restricted mode off (at the bottom of your screen) and not at all on most public networks. Restricted content on YouTube is usually that which has been flagged as age-inappropriate or which contains graphic violence. A forty-minute speech to an orthodox Jewish congregation would not seem to meet the usual criteria, let alone the various two-minute soundbites that are available. Cock-up, coincidence, or conspiracy? As ever, with this administration, it seems impossible to tell: but all possibilities have me crapping my spine out of my arse in fear. 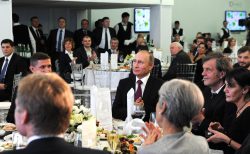 Who is that sat to the right of a smiling Vladimir Putin? Why, it’s Michael Flynn, National Security Advisor of the United States of America