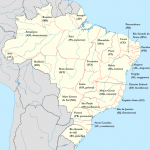 A plan to build a new capital for Brazil, located within the interior of the country, dates back to the country’s independence in 1822, but remained largely a talking point until after the second world war, when a new constitution expressly stated that the capital be moved to the central highlands. A site was quickly located and in 1956 president Juscelino Kubitschek de Oliveira initiated the project, with the intention of beginning the transfer of the institutions of the capital from Rio de Janeiro in 1960. A competition to design a plan for the city was won by Lúcio Costa, and the architectural development was by Oscar Niemeyer; between them they almost exclusively developed the design for the central city – Plano Piloto, “Pilot Plan” – which followed the egalitarian, functionalist, high modernist principles associated with Le Corbusier (Holford 1962:15–16). This optimistic modernism was encapsulated in the overall urban design of the city, famously shaped like an aircraft.  The new Federal District (Distrito Federal, DF) was carved from the state of Goiás. Not entirely uninhabited, it contained the towns of Planaltina and Brazlândia. Figure 1 shows the location of the Federal District within Brazil and Figure 2 the current regional subdivision of the Federal District. 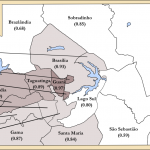 Figure 2: Map of the Federal District.

The tight control over the original Plano Piloto included several determinations that affected the design and development of the city, and that impacted importantly on the subsequent agglomeration and emergence of satellite cities. Most important of these was that the population of the Plano Piloto was to be limited to 600,000 – beyond this, it was claimed, the quality of life in the city would be endangered – and that no mixing of living quarters and working areas would be permitted, making all residents commuters, and firmly situating the majority of the available work in one location, the east–west axis of the Plano Piloto: that is, the “body” of the aircraft (see Madaleno 1996:274).

The initial period of construction and transfer of officials and institutions, which Paviani dates from 1956 to 1973. Although Costa’s original design was egalitarian, intending property within the plan to be affordable for all, the prices rose fast, excluding the majority of the transitory low- and lower-middle class population from the planned areas. As early as 1962, William Holford – who had been a member of the panel that selected Costa’s plan – was warning of social problems that could arise, stating the need for well-supported satellite cities and provision of low-cost housing that would avoid degeneration into favelas (Holford 1962:17). However, the housing of the poorer sections of society was initially permitted to develop in a somewhat laissez-faire manner, and the lack of infrastructure beyond the Plano Piloto meant that precisely the favelas Holford warned against rapidly developed, largely occupied by the migrant workers (known as candangos) involved in the construction of the city.

Once the major period of construction was over, the migrant labour failed to leave the region, somewhat to the surprise of the urban planners,1 and some action began to be taken to remove the favelas; notably with the founding of the satellite city Ceilândia in 1971, and the forcible closure of the Vila IAPI neighbourhood, with 82,000 residents moved to the new satellite. Richard Williams, with a more cynical perspective than Holford (and the benefit of hindsight) suggests that as Brasília was considered representative of Brazil’s modernization, “it could not be allowed to have the ‘blemishes’ that other large metropolitan areas had, specifically favelas. Brasília suppressed the favela from an early stage in favour of the creation of satellite towns that removed the question of poverty to the periphery, beyond the sight of the residents of the Pilot Plan” (Williams 2007:312).

In 1987 the AMB was declared a UNESCO World Heritage Site. Williams stresses that the recommendation was based entirely on aesthetic grounds, and indeed that the recommending committee specifically highlighted the favelas but totally failed to acknowledge the social problems that they manifested, being solely concerned with the aesthetic damage done to the purity of the original plan. The report proposed a buffer zone, with the Plano Piloto and the expensive lakeside developments on one side, and the satellite cities on the other (Williams 2007:324–325). Poor but expensive transport links between these towns and the centre2 – where around 76% of formal jobs are (Holanda et al 2002:1) – resulted in high levels of unemployment in the satellite cities, and corresponding rises in violence and social unrest. Also of note during this period was the end of the military dictatorship in Brazil, resulting in democratic structures for the region: with the elections of 1990 the first district deputies and the governor were elected.

In the current period, no new land development has taken place within the Plano Piloto (Dowall & Monkkonen 2007:1877). With the ending of the military dictatorship, political and administrative autonomy has arisen, although clearance of the slums and transfer of their inhabitants to the satellite cities has continued, increasing the social peripheralization of the non-elite. As Wright & Turkienicz predicted towards the end of the second phase (Wright & Turkienicz 1988:264), the fossilization of the Plano Piloto has led to the Taguatinga–Ceilândia connurbation to the southwest of Brasília emerging as a de facto centre of Federal District (Cidade & Jatobá 2004:7). The social problems remain linked to socio-spatial segregation, illegal land development and poor infrastructure outside of the Plano Piloto; the approach to these by the new, elected city and federal authorities is characterized as weak and ambivalent (Cidade & Jatobá 2004:7), at worst populist and corrupt (Thornton 2005:76ff.).

1 Interviewed in 1987, Lúcio Costa stated that “the workers were to stay during the three years of construction in temporary campsites which would later disappear. But these workers ended up getting permission from the government to bring their families and stayed on” (quoted in Wright & Turkienicz 1988:347; their translation). See also Madaleno 1996:277. [Back up.]

2 Holanda et al (2002) provide a ratio of passengers per kilometers of bus lines – a standard measure of efficiency of public transport systems. For Brasília this is 1.2; 4 times less than in other Brazilian metropolises of the same size (Holanda et al 2002:25). [Back up.]