In which a phonological and orthographic mismatch grant me a new, but serendipitously apposite, moniker

If you have, somehow, managed to live your life thus far without entering a Starbucks, you may not know that the barista who takes your order will ask your name to write on the cup, so that the barista who makes it may then familiarly call you by name when it is done. I’m a bad man, and in the UK I get my petty revenge on this minor act of corporate cosiness by giving somewhat abstruse names—usually that of a Roman emperor. But this is Brazil, the land that gave us Sócrates, Hércules Florence, and César Camargo Mariano; I have friends called Oseias and Átila, and used to get my hair cut by a guy with the magnificent name of Euripides Mendes. Trajan fazes them not one jot, nor Domitian, nor Vespasian. But Stuart, ah! now there we suddenly have a problem.

Portuguese does not end words in stops—that is, consonants like d or t in which the airflow is entirely halted—and consequentially they have problems pronouncing these and, when they import words such as internet or pub, an epenthetic -i sound is almost universally added. The addition of the -i then, in most dialects, turns the sound of t into tch, because dental stops are palatalized prior to high vowels, giving “intchernetchi,” “pubbi,” and, in my case, the magnificently mangled “Estchuartchi,” which features the terminal epenthetic i, the palatalization of both ts and, for good measure, an extra epenthetic e at the start of the word, because word-initial st is also out. Today I’m in Rio and there, where s is almost universally said seanconneryishly, I shall be treated to “Eshtchuartchi.” So much for pronunciation. But it turns out that they have trouble spelling it, too.

Combine all the above with a traditional cursive r, which looks all the world like an n to me, then you get this: 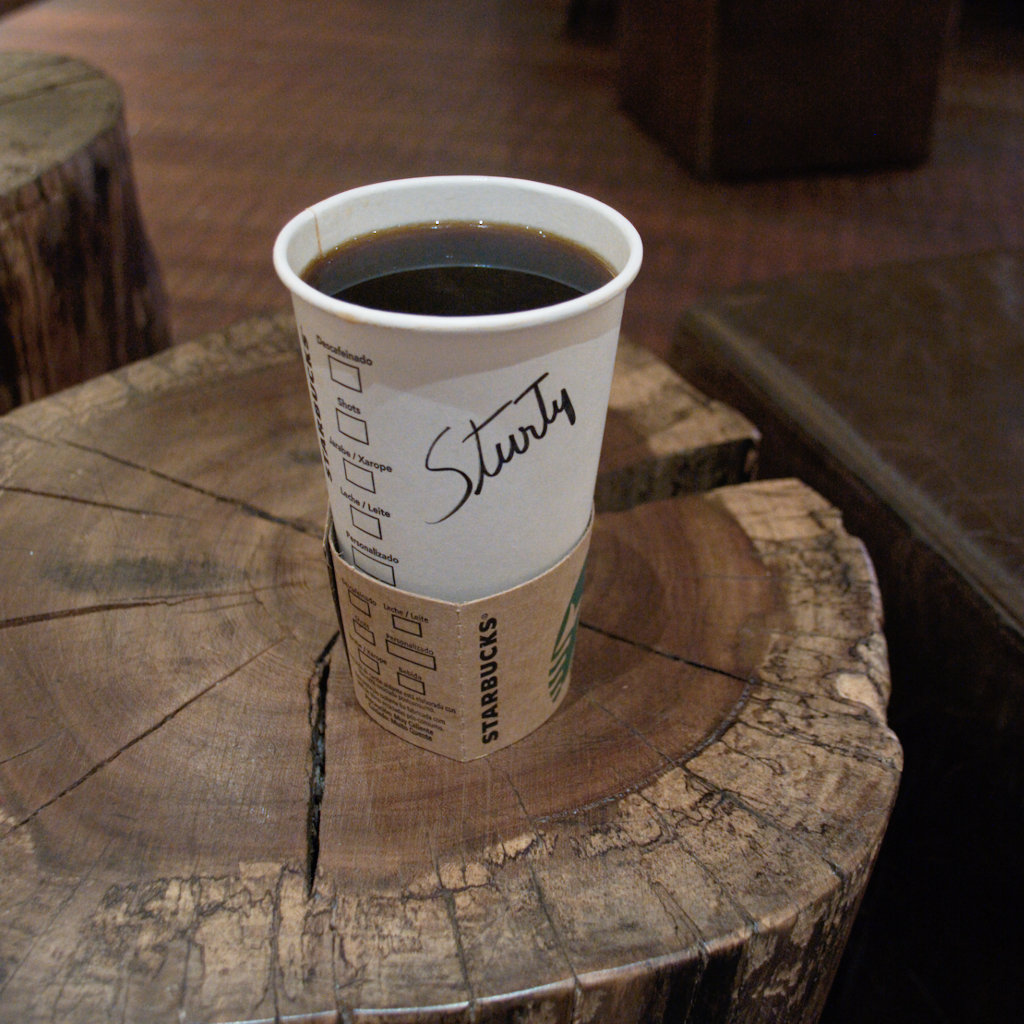 My name, as transcribed by a Brazilian barista.

… comes to you courtesy of a recent house move and consequent sartorial disorganisation.

A piece of advice: should you not have a pair of clean shorts of your own to hand when you are rushing out of the house in the morning, do not presume that you can simply grab a pair of your twin brother’s shorts. Keep in mind that (a) he is generally thinner than you, and (b) he was for a while very much thinner than you.

I got them about half way up my chubby, shapeless thighs before they ground to a shuddering halt, leaving me waddling around the changing rooms like Dick van Dyke doing his penguin dance in Mary Poppins, but minus the animated entourage, sense of rhythm, or dodgy accent. I feared they’d be stuck there, to be honest, and was left pondering how to get a bus home with legs even more abbreviated than usual.

Fortunately I managed to crowbar them off, and left the gym circa five minutes after going in, but rather redder in the face than I usually leave it.

Note: my legs are actually neither shapeless nor chubby; I have eviscerated the truth for the sake of humour. They are, however, ludicrously truncated. To be honest, were they any shorter I very much doubt my feet would reach the ground.