On the nature of Evil

Ethics, theology, and belief seem to crop up a fair amount on this blog, and many of you may have formed the impression that I am a moral relativist, rejecting as I do the existence of any kind of absolutist law-giving deity, and remaining highly dubious of arguments attempting to demonstrate natural, intrinsic, moral norms.

In this you would be right, at least as far as the Good is concerned. But Evil is a different matter. I have a very, very clear concept of absolute Evil, and it is thus: 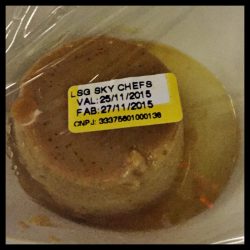 Let me be clear, I have no beef with sweet things (literally, as well as figuratively). Cake is fine. Biscuits, sure. We are coming to the part of the year where it is traditional to soak a wide range of confections in substantial quantities of whisky, rum, or brandy and of this I can but approve—though I frown slightly at the tradition of then burning some of it off, which rather defeats the point.

However—and I cannot stress this enough—the combination of sweetness of taste and gooeyness of texture is the nub, the pole, the lodestone, and the very epitome of Evil. That so many of you seem not only ignorant but actively in denial of this fact is a clear demonstration of the Fallen state of humankind.

Every nation commits this sin, in their own way. The British, of course, not satisfied with raping and pillaging the world through centuries of empire, made ourselves irredeemable by the infliction of custard thereupon. The Italians compound their popery and frilly shirts with panna cotta. The Germans gave us operas that last for whole weekends and Schokoküsse. The Turks and the Greeks compete not to deny but to lay claim to the eponymous delight of the former, and the French tauntingly burn a crust onto their puddles of sweetened cream, rather than committing the entire work of heresy to a justly-deserved auto-da-fé.

But Brazil! Oh Brazil! If the brigadeiro, the pudim, and canjica were not sufficient barbarisms to thrust upon your good, God-fearing people, the horrors of horrors of doce de leite alone place you at the height of the list of offenders. It is little surprise that so many of your folk devotedly attend church on Sundays and top up on Wednesdays, for you have much, much to repent of.

And the travesty pictured above? On a flight from Rio to Paris, some hideous, unforgivable individual, some spawn of Satan, some execrable inexcusable excrement of humanity had decided to celebrate this joining of nations by contorting together their greatest evils, and placed before each and every innocent passenger a doce de leite crème brûlée.

That the plane was not struck from the sky by a retributive bolt of divine lightning is the greatest evidence one could ever seek for the non-existence of God.