Here’s an idea for MPs opposed to that visit

Here’s a thought. It’s protozoic at the moment, but who knows? It could flourish in the strange and pungent primordial soup that is world politics at present.

The so-called President of the United States  has been invited by our very own Theresa May over for a state visit and I, along with (at the time of writing) 1,845,812 other people, am very unhappy about this.  But it is clear that a concerted effort, and some novel protest techniques, will be necessary to overturn this. As she prepares the United Kingdom for its post-Brexit friendlessness, Theresa May is cosying up to quite a litany of odious and authoritarian world leaders, and the tiny-handed sociopath is a friend she dearly needs to prop up the fantasies of a powerful and autonomous Brexit Britain.

It is import to protest Trump, and not just for the benefit of Americans, the environment, or the wider world. As the Tory Party has capitulated to the hard right, we are hurtling towards a horrendous, morally-vacuous UK, establishing itself as a tax haven and friend of the oppressor. To protest against Trump is also to protest this direction for our own country.

The people can take to the streets—I urge you to do so—but what can our MPs—those at least who have a shred of decency, a backbone, and lack a propensity for conveniently-timed migraines—do to try and prevent this insult from happening? They could debate, call him a “wazzock” and a “demagogue.” Or they could take some action. They could attempt to pass an Act of Pains and Penalties.

Parliament is an old institution governed largely by custom rather than explicit rules—this, after all, was the issue at stake in the Article 50 case—and there are many functions and statutes which, though unused for a century or more, nevertheless have never been revoked. One of these is the ability to pass private legislation: acts affecting only specific individuals. An Act of Pains and Penalties is one type thereof which, basically, declares a named individual to be guilty of a crime (bypassing and supervening the courts) and imposes upon them penalties, short of death, as fits Parliament’s pleasure. A more serious type, the Act of Attainder, declares the subject “attainted”—stripped of their property, civil rights, and customarily, though not necessarily, their life. The last Act of Attainder to be passed was in 1798, and it is not clear to me whether Acts of Attainder have been abolished or not.  But Pains and Penalties lie, still, within the powers of Parliament: not that long ago, under the previous Labour administration, Harriet Harman raised the idea of passing such an act to strip the banker Fred Goodwin of his pension and knighthood, and the powers that be are not beyond unearthing antiquated and unrepealed statute and outdated common law when it suits them: especially when it comes to harassing refugees.

The consequence of a Bill of Pains and Penalties (or, going the whole hog, Attainder) against Mr Trump succeeding would be that any land that he personally has rights to in the UK would escheat (oh! these lovely antiquated words) to the Crown; but more importantly should he set foot on British soil he would be subject to any penalty that Parliament saw fit to impose; the traditional attainted penalty being that “you be drawn on a hurdle to the place of execution where you shall be hanged by the neck and being alive cut down, your privy members shall be cut off and your bowels taken out and burned before you, your head severed from your body and your body divided into four quarters to be disposed of at the [Queen]’s pleasure.” The pussy-grabber may have pronounced himself a fan of torture and appeared to be at best indifferent to politically-motivated killing, but I think we should probably fall a little short of this and see no need for full attaintion (attaintance? attaintment?): perhaps just a short jail term as a slap on his tiny, tiny wrist. Enough to discourage him from visiting, which would be the real purpose of the action.

It wouldn’t be passed, of course. The bill would have to be introduced to the Commons as a Private Member’s Bill and would therefore require an MP with both principles and backbone to do so—a pairing which the recent Brexit vote shows is in woefully short supply in that chamber—and, without government-appointed time, no Private Member’s Bill stands any real chance of becoming law. But, when the Speaker has already shown himself to be laudably independent-minded and principled on this matter, one has hopes that another MP might have the gumption to put such a bill before the house. Should a hundred of them support it then it could, at least, progress beyond the second reading.

Such an action on the part of those MPs who supported it would be a greater and clearer message to the government than a simple repeat of the talking-shop of (richly deserved) insults that was the last debate on Mr Trump entering these shores. Normally I would shrink at proposing the use of an antiquated mechanism that, were we to have a codified modern constitution, would almost certainly be precluded (as it is in the US itself). But when the gentleman in question is himself in violation of his country’s constitution both in action and mere encumbancy—it somehow doesn’t seem too egregious to attempt a process which is perfectly legitimate, but merely as medieval as his personal views.

So, who’s going to propose it? An MP of courage and conviction, un-leanable-on by the government. Caroline Lucas, perhaps, or the inimitable and awesome Mhairi Black. I suppose some old dinosaur like Ken Clark or Dennis Skinner might do the job too, but personally I would rather not see yet another old white man throwing their weight around, even if in opposition to another, far worse, old white and/or orange man.

Go on, Mhairi, Caroline! Make us proud that some, at least, in our legislature can take positive action to try to derail the government’s shameful and reprehensible cosying up to the vile creature currently squatting in the Oval Office. 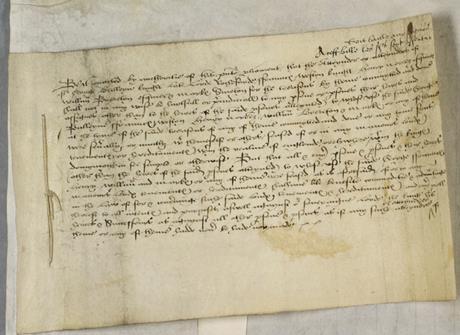 The Act of Attainder (1536) against Henry Norris, one of those executed for purportedly conducting an affair with Anne Boleyn. From the Parliamentary Archives, HL/PO/PU/1/1536/28H8n43.