Gob-smackingly, Nigel Farage said the following on LBC this morning about Brendan Cox, a man whose wife was assassinated by white supremacist terrorist not six months ago:

Yes, well of course he would know more about extremists than me, Mr Cox. He backs organisations like Hope Not Hate who masquerade as being lovely and peaceful but actually pursue violent and very undemocratic means. And I’m sorry Mr Cox, but it is time people started to take responsibility for what’s happened.

And so, once again, it is time to rehearse the litany of extremists that Nigel hangs with. Nigel, when he can be bothered to turn up, is co-president of the Europe of Freedom and Direct Democracy group in the European Parliament. Included in this group, which is small enough that we must presume that he knows these people personally, are:

Prior to the Europe of Freedom and Direct Democracy group, Nigel was co-president of its predecessor, the Europe of Freedom and Democracy group, alongside Francesco Speroni of Italy’s Northern League, a man who once said about Anders Brevik—the white supremacist who killed 77 people in Norway in 2011—that his “ideas are in defence of western civilization.”

Yes, indeed, Nigel. It is time to start to take responsibility for things that have happened. You hang out with, work with, and support white supremacist extremists who actively advocate violence and murder. You are a pestilent fascist, who the British press (or the relatively sane sections thereof) have long failed the British people by presenting as an amusing and blokish “man of the people.”

Take some responsibility yourself, Nigel. Shut the fuck up, fuck off over the pond, and go back to crawling up the arse of that other extremist fraud. He’s supported by the KKK, you know. You should find yourself totally at home. 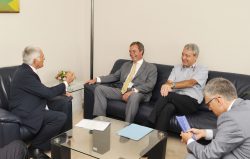 Nigel Farage enjoying a cosy moment on a sofa alongside a man who thinks that Anders Breivik had ideas in defence of western civilization.